From Drama to Dharma

From Drama to Dharma

Our gratitude is boundless to those of you who heard of Ty’s recent medical issues and sent  healing energy and love (which is one and the same!).  We are so grateful to share with you that he arrived home today after five days in the hospital and is doing great.

Every experience is an opportunity for growth, and this one had plenty.  So here’s “the rest of the story” …

For well over a year Ty has been dealing with the effects of an esophageal diverticulum—a pocket in the esophagus the size of the last digit on the thumb that trapped food every time he ate.  At least once a day he would choke on food to the point where I would have to ask, “Are you okay?  Can you breathe?”

Last Friday we went to Savannah Memorial University Hospital for what was supposed to have been a minimally invasive endoscopic procedure in which the surgeon would use a scope and a laser to cut through the muscle from within the esophagus to simply open up the pouch and make it part of the esophagus.  We were told there was a slight chance the doctor might need to resort to surgery and make a small incision in the side of his neck.  Okay.  We understood “slight chance.”

We reported to the day-surgery clinic fully expecting to be out in a couple of hours and go home.  Shock #1 was when we learned that even if all went as planned, Ty would have to spend the night until he did a “swallow test” with x-ray the next morning.  Okay.  Adjust a few plans and get on with the procedure.

I had decided not to make any of this public.  I didn’t want to draw attention to our private lives.

An hour and a half after they wheeled Ty into the operating room, the receptionist in the waiting room handed me a phone.  The woman on the phone said, “I’m a nurse in the operating room with your husband.  I want you to know that your husband is safe (I found this an unusual choice of words), but the doctor has had some difficulty getting access, and he is going in surgically through the neck.”

Being more than a bit empathic, I sensed the tension in her voice.  I sat back and took a deep breath.  I was flooded with the awareness of how many stories I had heard or read about the power of prayer.  Any need for privacy went out the door, and I put out a call for anyone who read my post on Facebook to affirm with me that the surgeon and medical team were guided by the highest Power and that Ty would be fully protected and well.

Within minutes I felt a blanket of peace settle over me.  Still, I had a sense that there would be something unusual happen during the surgery.  Indeed, when the surgeon came to brief me afterwards, he reported that Ty’s surgery made for quite a teaching case for his surgical interns.  Not only was everything too restricted to see clearly in the esophagus, but the surgeon discovered a self-contained mass behind the esophagus.  Hearing this, I felt no fear, just trust.  The surgeon then reported that he removed the entire mass, sent it to pathology, and stopped the surgery while awaiting the pathologist’s report:  It was a benign ganglio neuroma – fancy words for a mass of harmless tissue.  However, the doctor later confirmed that this mass could have continued to grow and cause other troublesome issues in the future.  So, was the surgery meant to unfold this way?  We are thankful, in any case.

When Ty was settled in a bed on a surgical ward, I was allowed to see him.  I must admit, he was downright angry.  He had adjusted to the thought of spending one night in the hospital, but he awoke to find a four-inch scar (not the ‘small incision’ for which there’d been a ‘slight chance.’), a bruise on his lip from the doctors wrestling their instruments, a feeding tube in his nose, and a nasty-looking tube stitched to the base of his throat draining blood into a large, plastic bulb lying on his chest.  I was the unfortunate messenger who got to tell him he now had to spend four nights in the hospital receiving liquid nutrition through the nasal tube until they could do a swallow test the following Tuesday.

He questioned his decision to have the procedure done, felt extremely frustrated, and was completely shocked by his own appearance.  He sent me home in no uncertain terms.  Aye aye, Captain.  There was no arguing with him.

I went to bed with an uneasy feeling.  The psychic side of me again sensed some kind of complication was going to arise that evening.  I felt a tremendous sense of grief walking around the empty house.  I had the strangest feeling that he might not be coming back to that house, and I took strength from the many loving comments on my Facebook page.

Emotionally wiped out after a long day, I easily fell asleep.  The phone awakened me just before midnight.  I saw it was Ty calling, and this is what he said, “I’m heading back to the operating room.  I didn’t want my last words to you to be in a text or an email.  I love you so much.  I don’t want you to drive back here an hour through the woods on a dark two lane road at this time of the night.  Please do not come in.  I love you with all my heart.”

After we hung up, I called the nurses station to find out what was going on.  The nurse handed the phone to a doctor, who explained there had been some bleeding and they needed to take Ty back to the OR and fix him up.  The doctor assured me that all of his vital signs were stable.

I lay back and asked for guidance.  Did I go in or stay safe in the bed?  I knew he might pass.  I was in no shape to drive, and even if I got there, all I could do was sit in an empty waiting room and would not be allowed to see him anyway.  I decided to abide by Ty’s wishes and stay home.  The surgeon who performed the original surgery called me two hours later and assured me that everything was fine.

I was on the road before sunrise and found Ty still in the recovery room.  They did not want to send him back to a regular ward just yet.  It was then that Ty filled in the details that I’m glad I didn’t know earlier: 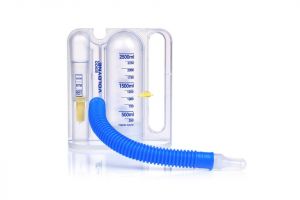 Just before midnight, he had decided to use the spirometer that the ward nurse gave him when he checked into his room.  This little device is to make sure bed-ridden patients exercise their lungs, thus avoiding pneumonia.  This was probably not the best thing to give to someone who had just had esophageal surgery, especially a physically-active over-achiever like Ty.  He decided to see if he could move the little bubble on the spirometer all the way to the top.

The nurse had just emptied the bottle from his surgical drain.  Within 15 minutes of using the spirometer, Ty noticed two things:  the drain bottle felt a little heavy on his chest, and he wasn’t feeling too good.  He looked down and the bottle had filled with fresh bright red blood.  He noticed his face felt full, and when he reached up, his face and neck were as hard as Styrofoam.

He pressed the call button and reported to the nurse that he had some internal bleeding.  She came immediately, took one look at him, and her eyes grew very big.  She grabbed a young resident walking by, and his eyes mirrored the nurse’s.  The doctor whipped out his cell phone and called the senior resident.  She rushed into the room, took one look at Ty and leapt into action.  (If you are queasy, skip the next few paragraphs).

As Ty watched, she pulled out a scalpel, and without any time for anesthesia, sliced right into his surgical incision.  Blood flowed everywhere.  She said to Ty, “You’re handling this very well,” and he replied, “Doctor, I’m glad I’ve never made you angry.  Seeing a woman coming at my throat with a scalpel is a little disconcerting.”

They then wheeled his bed straight for the operating room, where the surgeon who did the original surgery (and trained the other two doctors) was waiting.  Ty looked at him and said, “Doctor, I hope I haven’t just brought you from a sports bar!”  The surgeon held up all four corners of the sheet to keep Ty’s blood from flowing onto the floor and assured Ty that he had been at home watching TV on the couch with his wife.

I know that all of the prayers sent our way served a purpose and made a difference.  Only today did we learn from the surgeon that Ty had 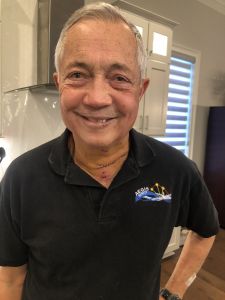 blown out a seal the surgeon had placed in a small branch of the jugular vein.

There is power in prayer.  Of this I have no doubt.  This morning the doctor pronounced Ty’s swallow test “pristine” and sent him home with nothing more than some Tylenol.  He is understandably tired, but so happy to be home with his “pack” (That’s me and our two dachshunds, Rudy and Gretchen).

The past five days have provided me more than a few spiritual lessons (dharma) in handling such serious drama.  Knowing that peace is always present beneath the drama helped us to maintain balance during all of this.  I look forward to sharing what I’ve learned with anyone who might find the insights useful.  For now, we are both ready to “just be,” and to continue enjoying every precious moment together, as we have done for the past 23 years.

Please allow me to repeat how very grateful we are for your love and healing energy.  It is tangible, and we are so grateful to have all of you in our lives.

Get the Daily Way by Email
The very first messages from spirit were in the form of poems and the first of these poems was delivered on July 12, 2009.  Suzanne does not write poetry and this was a way for her guides to convince her that the messages were truly from spirit.  The year of poems is found in Suzanne’s first blog.  CLICK HERE to enjoy the soul-touching words of messages 1-369.   “…The world is ready for these your words. They wait and listen with wings like birds. For ours is yours and yours is ours. Such is the greatness of the Great Spirit’s powers. Blessed are all who know these truths. Shout it, blast it, from the roofs. Be our voice, we work with you. We come to speak of beauty true. …” Spirit July 12, 2009