Those in the spirit world love to show us they exist and are part of our lives.  This week they have done so for me in miraculous ways.   …

A Day of Michaels 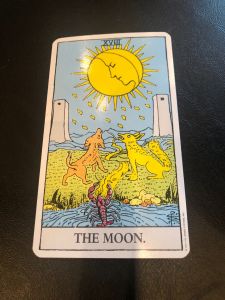 Sunday morning I was guided to pull a tarot card from the deck I draw from once in a while “just for fun.”  I drew the Moon card and noticed immediately the two wolves howling at the moon.  I couldn’t help but think of “Wolf”, the young man whose story I captured in my book Wolf’s Message, and I sent Wolf a silent wave of love.  I was equally pleased when I looked up the meaning of the card and read, “the Moon is a card of genius, of mental breakthroughs, astonishing creativity, powerful magic, and intuition.”

An hour later I was driving my car when I suddenly couldn’t catch my breath.  Rather than panicking, I silently asked, “Who’s here?”  In response, I heard, “Michael Jr.”  Now, Wolf’s real name is Michael Pasakarnis, Jr., but I didn’t sense Wolf’s presence.  The name came with the awareness that this unexpected drop-in was the son of the clients I would be reading for in a couple of hours.  He seemed quite eager to make himself known before I sat with his parents.

I began that reading by telling the couple that I’d had an unexpected visitor and felt it was their son.  I told them he told me his name is Michael

Jr.  The tears that flowed instantly from this deeply grieving mother and father confirmed that their son is, of course, still right here.  At the end of the reading, Mike Jr.’s mom told me that the day we’d scheduled for their reading was quite propitious, as it was Saint Michael’s day on the “Saint of the Day” calendar.

An hour after the reading, Ty asked me to get something for him from a cabinet in our bedroom.  As I dug through the drawer, my hand brushed against a bag of runes I had acquired after getting to know Wolf.  I hadn’t drawn a rune since we moved into our RV ten months ago, but I was nudged to do so in that moment.  I riffled my fingers through the smooth stones in the bag and when I heard, “That’s the one,” I pulled it out.  Of 26 stones in the bag, I had drawn “Tiwaz”, the one rune I wrote about in Wolf’s Message for its reference to a Wolf.  I was so sure of Wolf’s hand in this feast of Michaels that I called Mike Sr. and Beth Pasakarnis to share the awe and love.

How Unreal is It?

Hours later on the same Sunday, Ty and I drove a few miles down the road and launched our kayaks at a boat ramp by the Oyster Company on the May River in Bluffton, South Carolina.  We have only recently arrived in this area where we are building a house.  This was only the second time for me to paddle my super cool “like new” carbon fiber kayak that we bought the week before in Savannah, Georgia, an hour away.  The kayak shop owner sold the boat on consignment from a woman who had the boat custom made but seldom used it.

As I often do when kayaking, I used the time to practice mindfulness.  Paddling past the marsh grass, enjoying the scenery and the birds, I was thinking back over the morning’s events with the multiple Michael incidents.  On a whim, I silently asked Spirit, “Show me how unreal this reality really is.”  I quickly followed this request with the rejoinder: “And please make it painless and fun.” 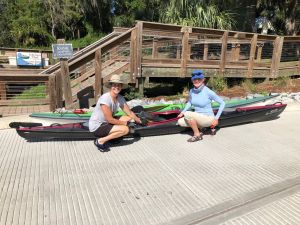 Half an hour later we pulled the kayaks from the water back at the boat ramp.  As I waited by the boats while Ty went to get the car, a woman approached me with a smile.  “That’s my kayak!” she announced, pointing at my one-of-a-kind black and plum boat.  I blinked in astonishment, but had no doubt as to the truth of her statement.  That’s how synchronicity works!

Ty was as dumbfounded as I was when he pulled up minutes later.  “What are the chances?” we exclaimed.  The Low Country of South Carolina and Georgia have countless put-ins for kayaks.  We had purchased this boat an hour away, yet entangled by “Orca,”  Nancy’s kayak, our paths converged.

I could almost hear my Team in spirit laughing.  “You asked for it …” 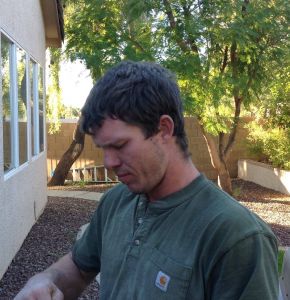 Monday I did a reading for the mother of a son across the veil.  For the fourth time in a row, the spirit was able to give me his name. In this case, David did a terrific job of providing the evidence to take away any doubt in his mom’s mind that he is still part of her life.  I had the added pleasure of being able to visualize and describe David’s physical characteristics.  He showed himself to be a big, snuggly bear of a guy.  He showed me a scene from The Jungle Book with Ballou the bear dancing around and referred to himself.  His mother joyfully recalled watching the movie with her son and how he had imitated Ballou’s dancing at the time.

David showed me similarities between his life and that of Wolf.  He told me that like Wolf, he often felt as if he were walking in two worlds at once.  His mother confirmed this.

When the reading was over, David’s mom sent me the photo of her son that you see here so I could compare it with how David had appeared to me.  I clapped with joy to see that this was who I had seen.

Tuesday morning I began the day as usual by sitting in meditation and receiving a message from my guides.  Afterwards, I sat on the couch of our bus to post the message at DailyWay.org   A song playing on Pandora caught my attention, and “for some reason,” (there’s always a reason!) I said, “Hey, Ty, what’s the name of that song?”  He picked up his iPhone, looked at the screen, and replied, “It’s called ‘Enigmatic,’ from a CD called ‘Two Worlds.‘”

With that, “for some reason” he tossed the phone onto the couch beside me and said, “Here.  Have a look.”  When I picked up the phone, I stared in shock at the CD cover.  See for yourself in the photo shown here.  Look at David’s photo next to the profile of the artist (Enlarge it to get the full effect).  Look at the ethereal quality and the use of the words “Two Worlds.”  This was truly an OMG moment.

I had asked the spirit world to show me just how unreal this reality is, and in the span of three days they did a fantastic job of it.  These three days are actually representative of so many other such magical days that have become the norm once I came to know that we are part of one big web and I learned how to tap into that web.*

A wise being once told me that anything we can create in consciousness is real and can convey truth, information, and healing.  This is because, in reality, everything is an expression of Consciousness –the One Divine Mind, including you and me.

Those in the spirit world love when we delight in their signs of our interconnectedness.  Lately, I’ve been referring to Spirit as “Joy.”  It is joyous to discover that our basic essence is Love.  It is joyous to discover that the only thing that’s UNREAL is the thought that we could ever be separated from Source, from Joy, and hence from each other.  In REALITY, there is only Joy-US!

We are all so very loved …

*I will share the keys to connecting across the veil in a video with The Shift Network that airs tomorrow, October 5th.  Click here to sign up to view this video.